Today was busy – three posts in one day! After dinner I took a stroll in the cemetery near my house, intending to better digest my leftovers from lunch. But the light was nice and all these statues beckoned, so I walked off the roads and up to the stone faces and chatted with a few of them. They’re nice folks, mostly, despite some serious handicaps here and there, some strange proportions and a smattering of unwarranted decoration down a few faces. 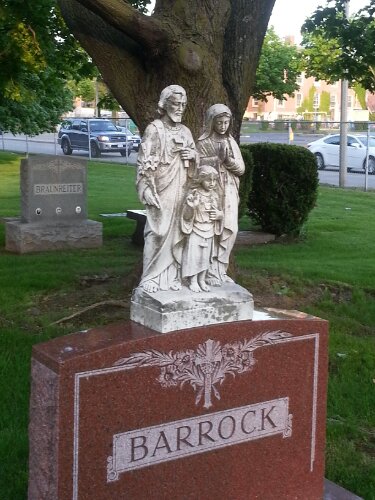 This group stands atop the Barrock family headstone. Papa’s cross has broken off and junior, though just over half the height of his father, has hands as large as the old man.

Mary holds her beloved son Jesus in the classic pose after he has died for mankind on the cross. Mary, strangely, has no face. 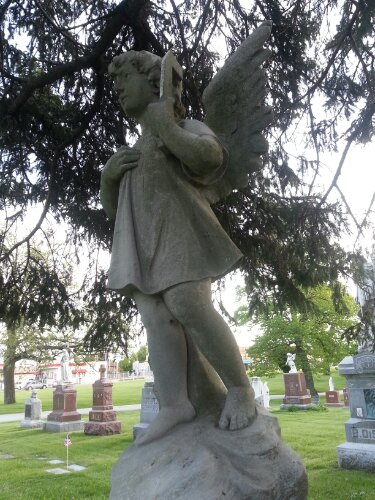 This young child unfortunately has the head of a 27-year old.

This lucky angel still has both of his wings. Some of his nearby peers were not as fortunate. 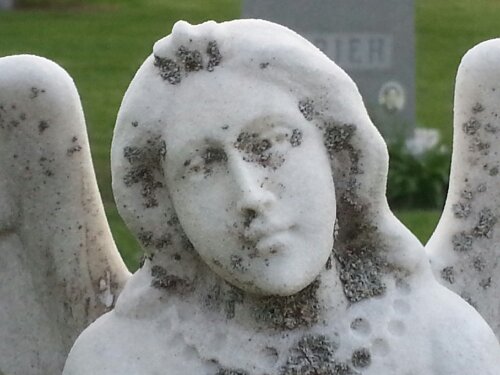 Reflections of trees (a little sunset color too) and stains of the metal letters trailing down the face of the Rau memorial stone. Or is it the Traut memorial stone?

This is their memorial. 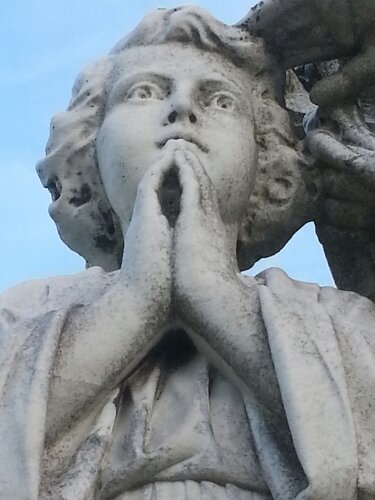 A close-up of the boy on the left, and below, the memorial in context, near the fence and across the street from the gas station and car wash. 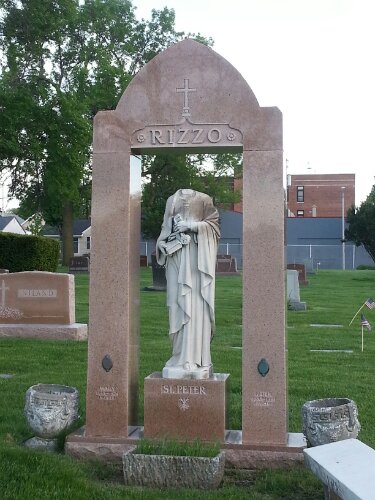 This is St. Peter. I don’t think he was actually beheaded in real life – crucified upside-down, I believe. 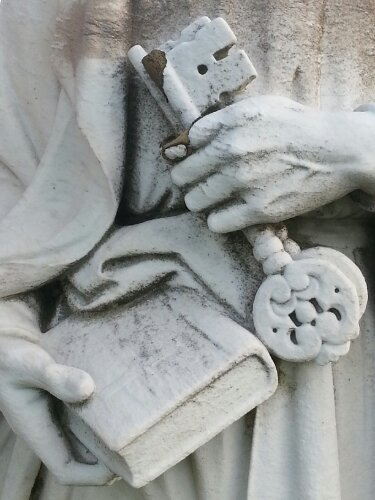 A close-up of Peter’s hands with what must have been a very early codex form of . . . wait, the Bible wasn’t the Bible yet when he was alive. Sermon-of-the-Month Club selection? (He probably would have read from a scroll.) He also holds the keys to the kingdom of heaven.

Mother comforts child on the next stone over. Even statues have feelings.

There are many stones in this cemetery with actual photos of the deceased mounted on them. I find this a bit disconcerting, if only that it really brings it home that everyone here was once living just like I am now. There are even a few images of children and young men, particularly sad. A few have been knocked off or chipped and some are more protected by metal hinged covers that may be lifted to view the images underneath.

Is this my good side? 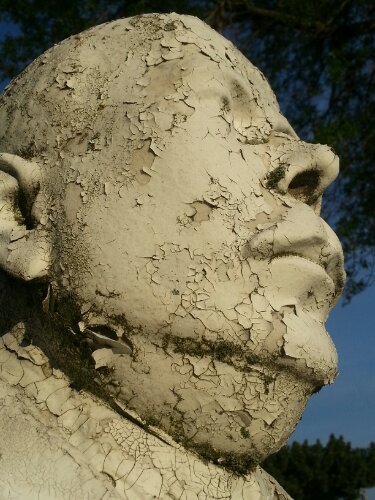 Or this one? This is one of the few statues that I’ve noticed in here that does not seem to depict the holy family or an angel. I thought at first it was Stalin, but Stalin’s buried in Moscow. I checked.

Missing three digits and sharing his papa’s sad expression, this lad holds a ball. Or maybe it’s an orange? None of the other children have toys or treats.

The sacred heart of Jesus, spotted with lichen.

I have always liked this statue of a man near a tree stump with his faithful companion at his feet. 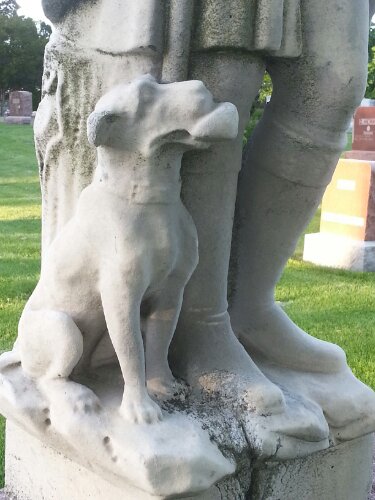 This is one of the happier-looking angels, dropping flower petals on Mrs. Miller.

Notice the hem of his garment. 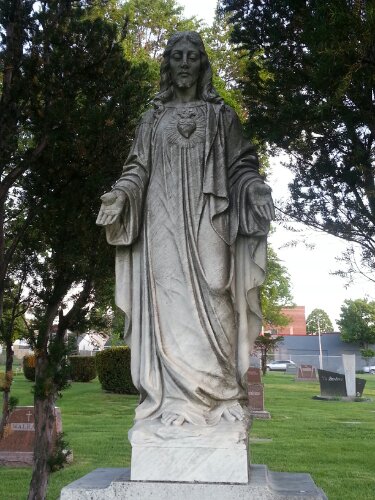 Josephine Natoli’s monument is one of the fancier ones. 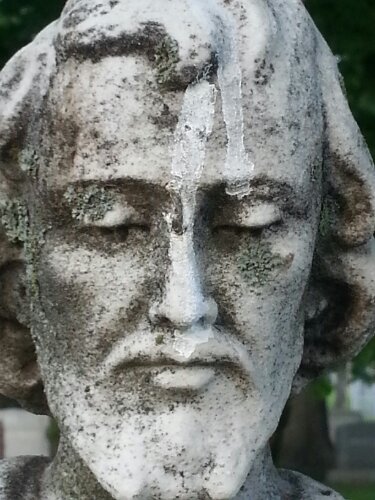 Don’t come any closer with that camera – I don’t want this to end up on Facebook! 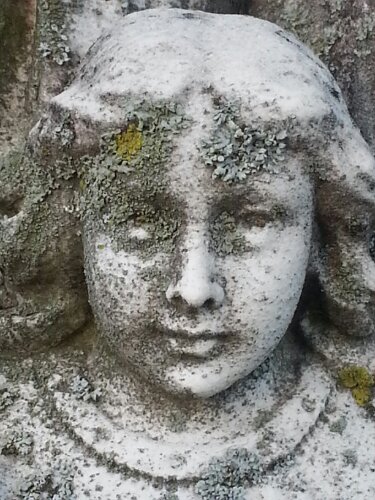 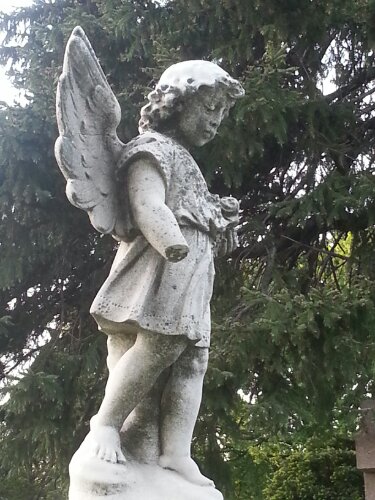 Notice the hem of her garment? I believe they used the same tailor. 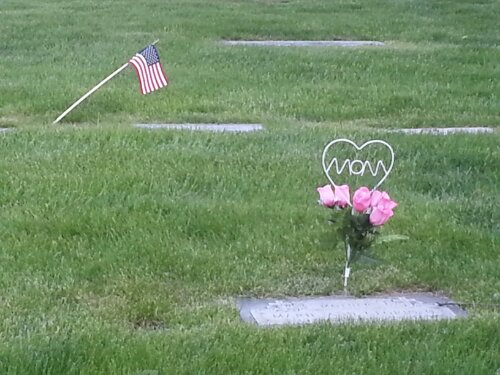 This is in the more recently occupied part of the cemetery, where few people have large monuments made anymore. It’s the thoughts and memories that count, after all.

You Thought These Were Cool!