“Preservatif” (condom in French) is a show curated by local artist Niki Johnson at the Stockholm Gallery space on the 4th floor of the Fortress Building, 100 E. Pleasant. The show opened this past Monday, December 1st, on World AIDS Day, and only runs one week. I went to see it today with my daughter and we were impressed by the individual works and the focus of the exhibition: “… the condom as a material to be re-imagined and reinterpreted.” I present a few glimpses into the show below, but there are more works that I didn’t feature here. Plus they are even better in person where you can see the details. I highly recommend visiting the exhibition before it’s gone.

This is the 4th floor of the Fortress Building, which is a really cool space that I had never visited before. The exhibit starts just around the corner to the right with a hallway of “formal but intimate” portrait photographs of men by Tara Bogart. 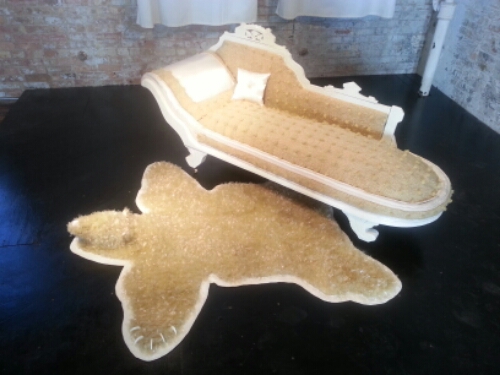 This two-piece work “Laid Bare” – fainting couch and “bearskin” rug – took over 800 hours to complete. Niki Johnson, exhibition curator and creator of this piece, told us how she upholstered the couch after taking it apart and removing the original horsehair stuffing and redoing the springs inside. The upholstery and the “fur” for the rug are made of strips cut from individual condoms. The main part of the bear was done like a regular latch-hook rug but features amazing details on the head and claws, as well as the finishing all around and underneath.

Melissa Dorn Richards created “Tent” with over 6,000 condoms and 12,000 zip ties. “Intrigued by the translucency of the condoms, I decided to leave them in their natural state and infuse color through the zip ties and fabric.” 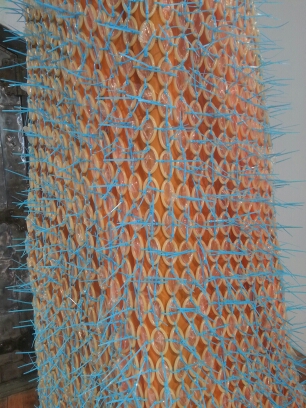 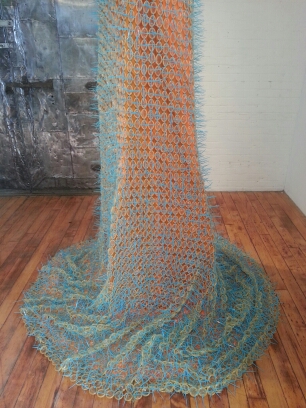 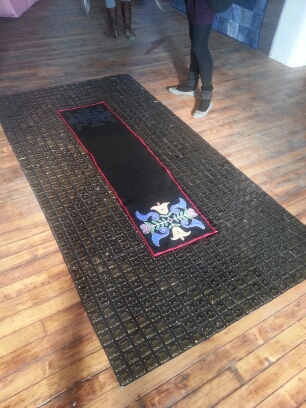 “Shag Snag” is seen on the floor above, created by Ho-Chunk artist Tom Jones. “The Ho-Chunk slang word ‘Snag’ is used to talk about a one-night stand. The piece Shag Snag is comprised of a man’s traditional beaded breechcloth spread out on a carpet of condoms. In honor of your life and World AIDS Day, if you are going to snag wear a condom.”

Heath Matysek-Snyder crafted “Two by Two: Life Boats for a Dead Tree” above using three elements – the boat or ark, the tree cut into two sections, and the condoms, which can be see attached along wood lines on the right 2/3 of the structure in this photo above. The piece examines “themes of human invention and survival, designed and engineered solutions, human dominance over the natural world, exhaustion and extinction of natural resources and the human waste system.” 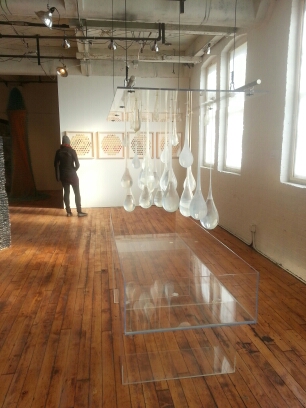 Heejin Hwang‘s piece entitled “Growth” explores “the tension between structure and sensuality [using] fractal images in nature such as the flow of blood through fractal blood vessels, and the branches of trees.” I particularly liked this one! 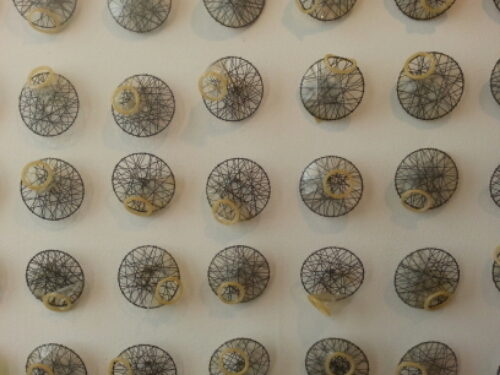 Above curator and artist Niki Johnson stops to answer my loads of questions as she cleans up around the space. The big black square in the middle of the frame is called “Don’t Die” by Greely Myatt, whose “first idea was to make a one-ton cube of the condoms stacked and shrink sealed onto a wooden shipping pallet. The form was derived from the mostly male generated minimalist cube.” The pallet is gone and the piece sits right on the floor instead. 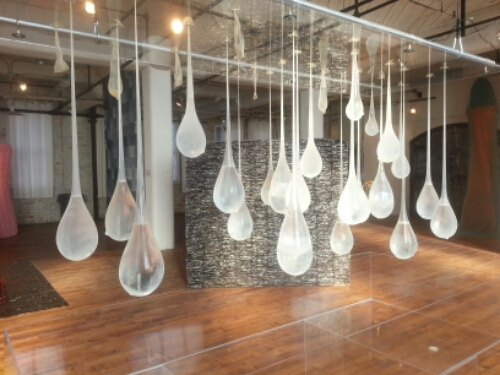 “Public Safety Test” (above) is an amazing piece by Demitra Copoulos that put the condoms to a test of tension. They are filled with liquid and hanging above a clear plexiglas container that catches drips that sporadically fall. “We all have limits or invisible barriers that make us feel safe and protected … whether they are emotional, physical or behavioral.”

“Keep it to Yourself” by Kim Hindman “is a series of four hand drawn images of Chlamydia, Trichomoniasis, Gonorrhea, and HIV. Displayed within an arrangement of unfurled condoms, the work references a view of disease through the lens of a Petri dish.” I was admiring this simply as a cool work of art, but then my daughter called my attention to the note for the work – I had no idea the drawings inside the condoms represented sexually transmitted diseases. Wow. People are really creative in this exhibit. 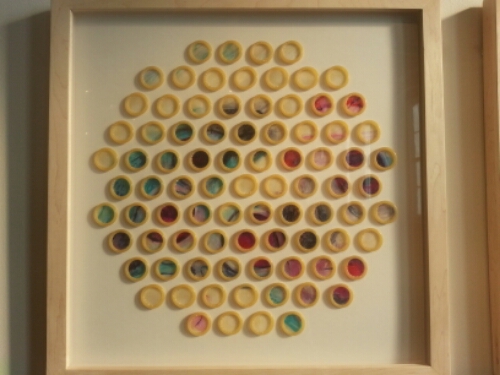 Sorry this one isn’t in such great focus. I was shooting, as usual, with my phone and I don’t always get it done just right. You just have to visit the gallery THIS WEEK and see this in person. Totally worth the trip.

Here my daughter is showing how the condoms used as material in this show have been made into the belt on this woman’s dress. Before we left the show, Niki gave us each one of the suede-covered condom boxes within which all the donated condoms were packaged. (see photo at the end of this post)

Here you can see a close up of the condom box belt on this lovely dress by Linda Marcus. She painted and sewed condoms into the main fabric for the dress and added what look like delicate condom flowers along the neckline.

Linda Marcus also created this “LBD” or little black dress out of the paper instructions that came with the condoms, accentuated by suede flowers crafted from more of the packaging. 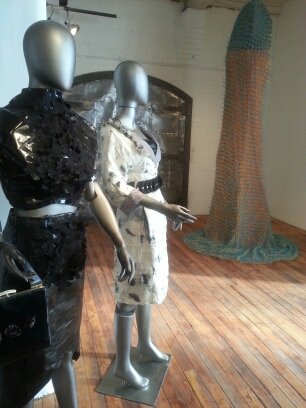 All of the information provided here came from the material that was handed out at the exhibit. I want to end by sharing the “About” section that tells how the exhibit came about:

In the fall of 2013, Niki Johnson received a donation of 1.2 million condoms from a distribution company looking to clear out a defunct client’s storage space. The elaborately packaged boutique condoms were 4 weeks from expiration and though she tried to reach out, no sexual advocacy group could accept, process and distribute the donation in such a short time-frame. The distribution company was aware of Johnson’s artwork, and contacted her in hopes of seeing the materials put to use. The shipment, totaling 21,000 pounds was delivered to a donated warehouse space she was able to secure in Milwaukee in October, 2013.

Together, Niki Johnson and Kim Hindman have brought together a group of 20 national artists to transform this shipment into Preservatif, an exhibition that focuses on the condom as a material to be re-imagined and reinterpreted. The artists selected for this exhibition come from a variety of backgrounds and material practices including: sculpture, jewelry, photography, performance art, ceramics, and interdisciplinary practices. Opening on World AIDS Day, December 1, 2014, Preservatif aims to raise awareness, eyebrows and horizons in response to this incredible material.

Preservatif is made possible through support from people like you! To make a tax-deductible donation please visit Crowdrise. You can also view the webpage for Preservatif and for artist Niki Johnson.

You Thought These Were Cool!